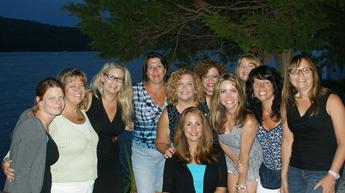 On a beautiful August night last summer I had the opportunity to meet with the Book Walkers Club in Greenwood Lake, New York to discuss The Dragonfly Series. Great group of ladies.

Where do you come up with story ideas? Basic story lines have come to me in dreams, while driving and sometimes from something someone says. The characters of Nikki and Jesse from the Every Grain of Sand series actually developed in my head while listening to Carrie Underwood's song "American Girl." Once I start writing, though, the characters reveal themselves and determine their own story line. It's very rare that I know how a story will end when I just start writing it. On two occasions, I had thought I finished the story, but readers wanted more. At a dinner with a book club, I was convinced to write another book in what was The Dragonfly Series, but became The Dragonfly Trilogy with the requested addition of All That I Have. The Strong Armed Series originally ended with the car accident at the end of the third book and an epilogue that let the reader imagine the outcome; but my beta readers wanted an ending wrapped up neatly in a bow. That led to not only book 4, but to the supplement Inner Strength. I always listen to reader feedback, so feel free to speak up!

Do you base your characters on real people? Yes and no. I have used personality traits of people I know in developing characters, but have not used people's own experiences. For example, in The Dragonfly Trilogy, Paige Campbell is based on my own mother's personality and beliefs. She loves and accepts, even when hurt or disappointed. It was my mother who introduced me to The Legend of the Dragonfly. However, that is where the similarities end. She was not married right out of high school and did not lose a husband and daughter in a fire.

Are the leading men based on your husband? He'd certainly like to think so! I will say that some of the guys have a trait or two of my husband, however no two are alike, so I couldn't say any of them is more like him than the others. More than using traits of my husband, I have occasionally taken something he's said or done and put it in a book if it works with the story line.

If these stories were made into movies, do you have actors you have envisioned playing these characters? Their physical descriptions are often inspired by actors I think are sexy. Yes, I could cast each of these stories with actors everyone would know; however, I won't print my ideas because the best part of a book is creating an image in the reader's mind. Likewise, when I'm selecting photos for covers, whenever possible, I try not to use full faces of people, because I want the reader to customize the story to their own imagination.

Were you inspired to write your stories by Fifty Shades of Grey? No. My first two published series were written and read by friends before the release of Fifty Shades. However, the success of it inspired me to do something with them, other than keep them in piles in my house. A friend who read (and eventually named) Spelled in Shells, read Fifty Shades before me and told me I had to publish my books. So, in that regard, I tip my hat to EL James. And yes, I have read the Fifty Shades series.

With the movie release of Fifty Shades of Grey, many are calling it glorified domestic abuse. Do you believe that Anastasia Steele is a victim? No, I do not. The best thing about books, all books, is that the reader is able to interpret them in their own way. No two readers will have the exact same experience or opinion. In my opinion, she always had the upper hand in the relationship with Christian. He was honest with her and even warned her away a few times. She was curious and saw something inside of him that many didn't. I also think introducing the character of Leila was important, because it highlighted the difference between an unstable victim and a woman making her own choices to be in that type of relationship. I did see the movie and think that Dakota Johnson did a very good job of bringing strength to the character. I enjoy complex characters; and both Christian and Ana are complex.

The Chosen Trilogy is your only series in the paranormal genre. Will you write others? I never want to say never. That was my first foray into paranormal and was a lot of fun to write, because I was not prohibited by fact or even rules of nature. That provided a lot of freedom and allowed twists and turns that would have been impossible in any other genre. The idea just popped into my head one day, like, imagine if someone met this totally hot, wonderful guy and boom! he was the son of the devil. So I went with it. I don't know if I'll get another idea like that, but have no plans at the moment. One thing I know I won't be writing about, because it's not really "my thing," is shifters ...although, Michael transforms, so maybe I have?

Are you working on any other stories/series currently? Always. I currently have three drafts written for another trilogy "Faith, Hope and Joy", consisting of three stand alone novels, but got sidetracked by another story idea for a standalone book that has consumed my time lately, which I think will be titled "When We Were Us." I've also had a political thriller sitting on my shelf for a decade now. It's total fiction, but with such a hot political climate, I'm not sure it would be good to pursue at this time. But stay tuned...there's always something brewing.